Silvia is a Marine Biologist from the University of Genova (2005). Her professional connections with nature are diverse. She has worked as a diving instructor on the Ligurian coast and as a professor of Natural Sciences in Italy for several years. She spent a year in New Zealand traveling and discovering the country, while working as a marine biologist at the University of Christchurch. Tireless traveler has traveled around the world touring Europe, Sri Lanka, California, Hawaii, Fiji, New Zealand, Chile, Cuba or Egypt, among other countries.

In 2002 she visited for the first time the green coast of Cantabria in northern Spain, a fascinating corner of the world for its landscapes between the sea and the mountains, where he discovers the world of surfing. In 2007 she returned to Cantabria to work in oceanographic campaigns by the Spanish Institute of Oceanography. She currently lives there with her husband and son, surfing every day. Passionate about nature since childhood thanks to the education she had from her parents she has pro-actively participating as a volunteer in numerous initiatives in favor of the protection of the environment and the oceans both in Spain and in Italy. 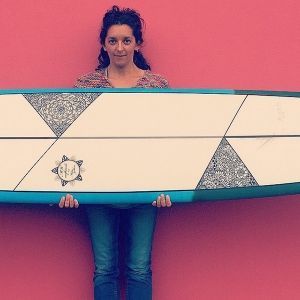