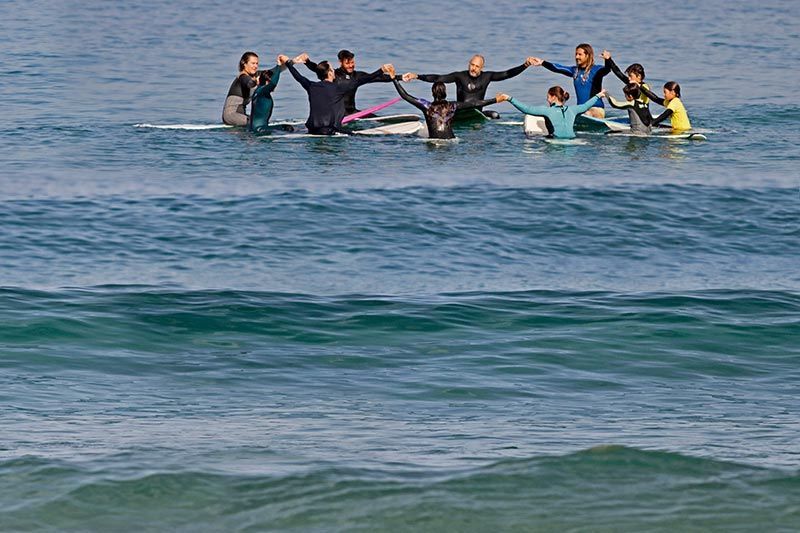 1. What inspired your project?

Our connection to the ocean, and the urgent need to protect the marine and coastal heritage from global issues. We found many endangered surf zones around the world hosting unique hydrodiversity and biodiversity. They are a natural, cultural, socioeconomic and sports resource for the local communities, and they need to be protected and well preserved as part of the coastal heritage.

2. What is the Surf & Nature Alliance?

Surf & Nature Alliance is an international and intercultural non-profit organization, dedicated to the conservation of the marine environment with a special interest in the surf areas, and the development of ocean’s science and literacy.

A little over 10 years ago, a group of surfers from the Cantabrian Sea (Spain) began to work for the protection of the marine environment and their surf breaks on an individual basis. In 2012, this movement became a social collective known under the pseudonym Time for Waves. After creating the first Surf and Nature Reserves in Spain, we formally constituted ourselves as a non-profit NGO in early 2017. Surf & Nature Alliance was born to coordinate the efforts of scientists, academics, activists, and people like you, to work with local communities scattered around the world preserving their coastal heritage.

We have developed our own methodology based in our scientific, academic and legal knowledge, to provide local coastal communities with the mechanisms and tools with which to value their coastal heritage and preserve it in the long term. We carry out research, education, sustainable development, lobby, and direct actions, to protect, raise awareness, and leave a natural and cultural legacy for future generations.

5. Who are behind this Alliance?

Ocean lovers like you. Activists, scientists, academics, explorers, technicians, artists, volunteers, and surfers who inspire change with their talent to create awareness towards the protection and conservation of our oceans, coasts, beaches, and surf breaks. Our team and Committees include some prestigious European and North American academics and scientist and academics from the universities of Comillas, and Oviedo in Spain, Berkeley and New York in the US. They are developing ocean literacy and science, to raise awareness and find innovative and more efficient formulas for marine environment conservation.

6. What kind of problems or threats are you facing?

Misinformation and lack of knowledge for the assessment, conservation, and management of waves, surf breaks and their marine environments, understood not only as mere habitats for flora and fauna but as part of the hydrodiversity, natural diversity of the blue planet.

Pollution, degradation, and impacts on the marine and coastal environment

7. Are there many waves threatened?

Yes. They are many more than imaginable. Our oceans are under constant threat and surf breaks are no less so. Many have become extinct, others such as Mundaka have been seriously threatened and thanks to conservation programs are legally protected.

8. What makes you special from other marine and wave conservation organizations?

Up to date, we have remained totally independent thanks to the work and financial contributions of our own team.

With your help and commitment, we can go further. Help us spread the word and protect many more places around the world.

As an independent, non-profit organization, we depend on the generosity of donors to help fund our programs and campaigns. At this critical moment for the environment, your contribution is vital and we kindly appreciate it.